It was all looking up in the world of Grime and broader Black British music culture. That was until the global pandemic known as Covid-19 hit the UK shores and towns and cities across the nation were put on lockdown. For all intents and purposes, from sports to the arts, progression was put on pause. But, with that said, forward thinking members of the scene have taken the opportunity capitalise on the moment and continued to entertain the masses.

Shoutout C4 for being the first to merchandise the mask ting – salute.

As everyone began to accept the inevitable and adapt to the climate some artists turned to their craft to take them through this period of uncertainty. One such MC was the young mic man known as SBK, who decided to send a shot at the North London newcomer by the name of Subten – who got in the mix of the warfare that kicked off the year with the Wiley dub which was entitled ‘Back To The Village’. With Yizzy closing the door on his feuds with certain MC’s, Subten seemed to be one of the few MC’s that could be a justified target for SBK, so, in the name of war, he waged his offensive in the form of the track ‘Back To The Village’.  It’s unclear if Subten will respond, but the stage has been set, and we’ll have to see how this one goes.

As the days and weeks of  a nationwide quarantine progressed in the UK and the US, a lot of us have been tuned in to the beat battles that were sweeping the states and garnering global attention. The culture of clashing is intrinsic to the nature of Grime culture, and the excitement generated by these wars were beginning to inspire some action on our homeshores leading to arguably the most talked about clash since Stormzy and Wiley went head to head in January.

Skepta and Jammer took to insta live for an impromptu beat battle which resulted in a spectacle of epic proportions. Both artists dug deep in the crates, but what made it special was the interactions between the two from Skepta talking up the war and Jammer’s comical reactions. If you missed it, it’s a kinda “You had to be there” situation, but some did manage to capture some of magical moments that will give you an idea of the experience, and incentive to not miss out on the potential clashes that are the cards.

Although Jammer came with some serious selections and created some magical moments, by popular opinion Skepta took the title with a landslide victory, as reflected in the rundown by some of the key figures in the scene.

As DJ Logan Sama accurately mentioned, when Jammer dropped the Destruction vocal it was an emotional moment particurlary when the late great Esco verse dropped in. If you wanna sample a piece of the energy check out the extended vocal below – pure Grime gold.

Following this clash the thirst for more war was a feeling felt by everyone who shared the experience, and work began on coordinated a follow up affair… 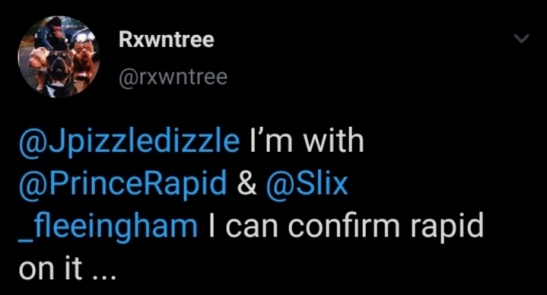 The Rapid Vs DaVinChe clash is one I’m sure all the hardcore Grime fans would love to see. Two Triple OG producers with two contrasting and distinctive styles digging in the crates and clashing for the culture is the stuff that dreams are made of. But with no confirmation from DaVinChe, we can only hope he’ll come out of the shadows to take uo the challenge and gives the people another standout spectacle to lift spirits in these disparaging times at some point in the future – although, for some reason, this seems unlikely.

There’s been a lot of people calling it on, but confirmations of who will actually engage in the war are still pending, but we’ll surely be seeing more of these clashes as the weeks progress, especially with Rude Kid & Spyro now confirmed to throw down for the culture.

With all the attention on the producers, this instalive format lends itself to clashing in all forms, and it was only a matter of time before someone encouraged the MC’s to take part.

With Jammer now pushing for some vocal match up’s, it’ll be interesting to see how Grime in the digital landscape will shape out in the coming weeks. But, I’m the products of this circumstance driven format will yield some more entertaining moments, and inform the music to come.